Firstly, a huge congratulations to Chris and the team at Tru-Tension on their success in the Dragons’ Den, successfully securing £75,000 of investment from retail guru Touker Suleyman. It’s a result of Chris’s often inconceivable level of dedication and hard work, the sheer graft of his team and the unwavering support from the people around him. It’s been a privilege to share our journeys while we started our businesses at the same time, and it’s an added bonus that we continue to work together almost every day.

This is our story together, so far!

One of the very first marketing objectives we identified together back in a pub in 2015 was to get the brand onto Dragons’ Den using Tru-Tension’s inaugural product, the innovative Chain Monkey, as a method of achieving our goal of the Tru-Tension brand becoming a household name for motorcyclists around the world.

Due to the product’s game-changing nature, we knew early on that the product and its potential was exciting enough to make it onto The Den. With so many priorities and a huge marketing plan covering social media, website marketing and public relations, the biggest question for us was timing. 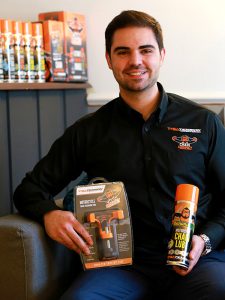 What is a Chain Monkey?

The Chain Monkey is a tool that changes the way motorcyclists measure and set the tension of their bike’s chain, a task which was previously a time consuming inconvenience. Now it can be done first time, every time with the Chain Monkey.

When should we apply for Dragons’ Den?

As many others do, we could have made an application before the product was released, or just a few months after the initial launch in 2015, when Chris’s sales began to boom. However, the marketing strategy has always been about growing a brand in a sustainable manner, attracting customers who wanted to regularly invest in products that stood out against the boring competition.

We all knew that if Chris went to The Den too early, the brand may not be viewed as established which is too often a weakness on the show. He needed to prove as much as he could that, given the chance, his business was much more than one clever idea.

As regular viewers will know, The Dragons rarely invest in a product without strong financials and the proven ability to attract repeat business. This scenario usually presents a fine opportunity for a Dragon to roast the budding entrepreneur in front of them, prompting the question “how many thousand products have you sold?”, only to receive the response “43… in total”.

By the summer of 2017, Chris had over 12 months of strong sales data behind him, a wide range of products which were selling well both online through his re-vamped website, which was now positioned to hold hundreds of products in the future, rather than encouraging users to buy a single product. Chain Monkey was no longer carrying the business. It was becoming a brand familiar to bikers around the world, and had begun to establish itself in retailers across the UK, catching the eyes of major store chains like Halfords and J&S following a glowingly positive reception from his press release.

We knew it was time to strike while the iron was hot, and before Chris began preparing for the run up to Christmas, so we worked on the application, thoroughly checking the statistics, dotting every i, crossing every t and leaving no stone unturned before firing the email off to the BBC with one nervous click.

2 weeks later, Chris was invited to the BBC to pitch to the producers. We then had to quickly video another pitch at Tru-Tension’s offices for the producers to review, while we all waited by the phone.

Just days later, Chris walks into the office to tell us the fantastic news that he was going to be on The Den. The bad news is, filming was in just 2 weeks’ time, and we had some serious work to do. Also, he needed to borrow one of our motorbikes for the show!

What followed was many late nights, tight deadlines and blood, sweat and tears on Chris’s part. As we packed up Nick’s motorbike on the back of Chris’s dad’s van, we just knew he would secure investment from a Dragon – we just didn’t know which one! 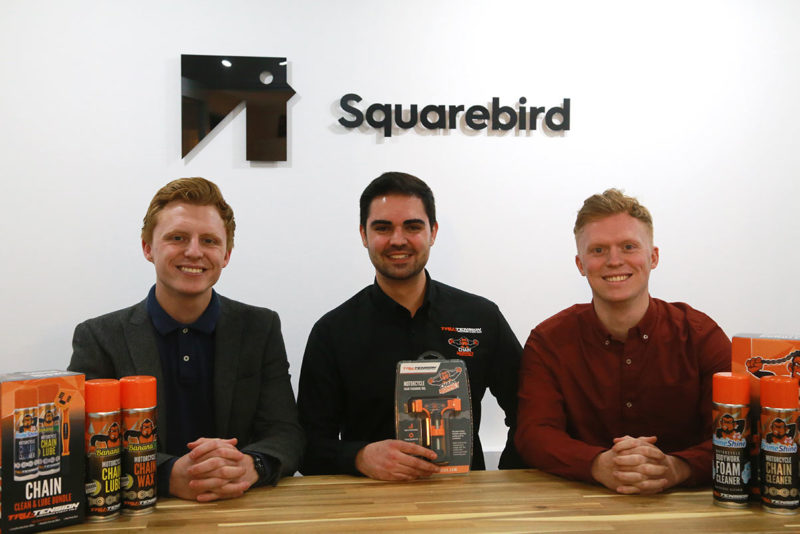 “Tru-Tension are now moving on from the early phase that so many product-selling start-ups fail to get away from. The brand has broken off the rollercoaster tracks in previous months, and it’s now rocketing off with £75,000 of investment from one of the best Dragons in retail.

Building our companies at the same time has been quite a unique privilege, and this event is the pinnacle (so far!) of some extraordinary hard work of everyone involved. We are absolutely delighted for Chris and his team, he has put everything on the line and it’s now paying off. His products rock and his brand is bold, bright and disruptive. It’s easy to see why the Dragons snapped at the chance to invest.

Due to starting our businesses together and our close relationship, we often find ourselves leaning on each other for advice and an outsiders opinion throughout the stresses and countless sleepless nights that’s involved in the early days of managing a start-up, through to a growing business.

The future certainly looks bright for Tru-Tension, and we wish Chris and his team all the best for the future!”

Do you have a product you would like to get in front of The Dragons?

Get a free consultation call with our team.